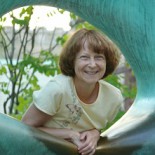 "The poems are the work of a profoundly serious temperament and a professional translator of world into word"– Michael Salcman, Judge, Harriss Poetry Prize

Recent reviews of the book:

Szklana gora/Glass Mountain includes translations in what could be considered minority languages. For example, one of the languages, Occitan, has at the most 800,000 native speakers. [ ]

[….] The book, whose very cover is a work of visual art on the theme of Lidia Kosk’s glass mountain, contains 21 translations of Kosk’s short poem “Szklana góra,” whose English version (translated by Kosk-Kosicka) begins

Even if you don’t read Spanish or Hungarian or Mandarin, this little book will capture your imagination. Kosk-Kosicka’s unusually thoughtful introductory note not only describes how the project was conceived and then took on a life of its own, but her own shifting and sometimes-nervous responses as her mother’s poem wandered into languages she herself could not read and whose translated versions she could neither understand nor evaluate. [ ] While Kosk-Kosicka personally knew a number of the translators, others were internet acquaintances. As she writes, “Poetry has linked us on an emotional plane, and that bond now takes physical form in the pages of this book.” Kosk-Kosicka’s note – and the remarkable project it describes – is an unabashed valentine to the power of poetry and translation to cross borders, to open hearts and minds, and to bring people together.

The poem “Glass Mountain” has also been translated into additional languages: